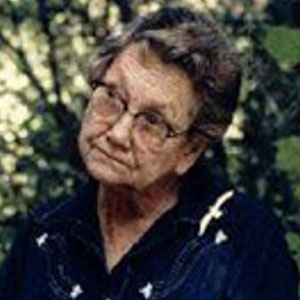 Author, artist, lecturer, and founder and sole proprietor of Presscraft Papers in Benzonia, Michigan, Gwen Frostic is known throughout the nation for her images of nature and for illustrated books which reflect her indomitable philosophy.

Frostic was born in Sandusky, Michigan and lived in St. Charles before moving to Wyandotte for her high school years. Interested in art from an early age, she used a band saw to create life-size posters for school events, and later studied art education at Eastern Michigan and Western Michigan Universities. During World War II, she worked in a Ford Motor Company bomber plant where she learned production, a skill she put to good use running the 15 Heidelberg presses in her northern Michigan printing and sales establishment. These presses make impressions from her hand-carved linoleum blocks onto paper and the resulting prints found their way into distinctive books, pamphlets, stationery, and other products she designed.

After beginning her business in Wyandotte, Frostic moved to Benzie County in 1955, starting with 40 acres and gradually creating a 285-acre wildlife sanctuary 35 miles southwest of Traverse City. Her commitment to nature and design is reflected in her home, studio, and print shop which draw thousands of visitors each summer.

Both state and national horticultural societies have also recognized her contribution to our appreciation of natural beauty.