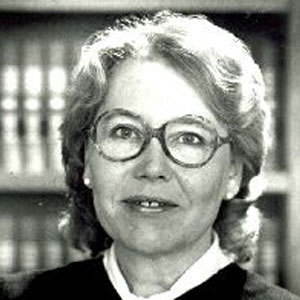 Once a member of the Michigan Supreme Court, Patricia Boyle relinquished lifetime tenure on the federal bench to accept appointment to the state’s highest judicial system.

Boyle was born in 1937 in Detroit and graduated first in her class from Wayne State University Law School in 1963, giving birth to three of her four children while completing her legal education. Despite serving as senior editor of the “Wayne Law Review,” she had initial difficulties finding work as a lawyer. She eventually took a position with the U.S. Attorney’s Office and later with the Wayne County Prosecutor’s Office. While a county prosecutor, she structured a victim’s program with special emphasis on the treatment of rape victims. And, as a member of the Michigan Women’s Task Force on Rape, she helped draft the comprehensive reform of Michigan’s law on criminal sexual conduct. This legislation was used as a model by many other states and has been described as the most successful rape law reform measure in the nation. She planned and directed training seminars in the new law for attorneys, police officers, and judges.

Governor William Milliken appointed her to Detroit Recorder’s Court in 1976 and, within two years of assuming judicial office, she was rated the best of 20 judges in Recorder’s Court by the attorneys who practiced there. She was appointed to the federal District Court by President Jimmy Carter in 1978.

Boyle has received many awards from both citizen and legal groups, including two National Organization for Women Feminist of the Year Awards.