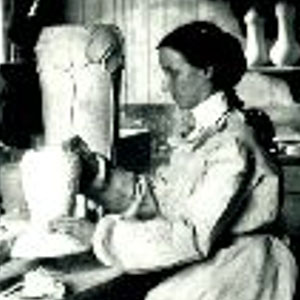 Founder of the Pewabic Pottery and enthusiastic promoter of the Arts and Crafts Movement in the United States, Mary Chase Perry Stratton is recognized historically for the iridescent glazes of her pottery and tile installations. Major Pewabic commissions adorn the Detroit Public Library, the Cathedral of St. John the Divine in New York, the National Shrine of the Immaculate Conception, and other public buildings.

Perry Stratton was born in Hancock, Michigan, and worked with clay even as a child. She studied at Alfred University in New York, at the Detroit Art Academy, and at the Art Academy of Cincinnati, a major center for women pioneers in ceramic art. In 1903 she and partner Horace J. Caulkins established the Pewabic Pottery, now housed in an award-winning building on Jefferson Avenue in Detroit and still serving as a gallery and studio. Late in her career she married William Stratton, the building’s architect.

Her early vases created in the Art Nouveau style are highly prized by collectors, but it is the decorative fountains and other large tile installations that brought the name Pewabic and her brilliant blue glazes to the attention of the general public. Perry Stratton is remembered for her scientific experimentation with glazing and firing techniques, her attention to the highest standards of design and execution throughout all phases of her business, and her enthusiasm as a lecturer and teacher who urged students to discover their own artistic style.