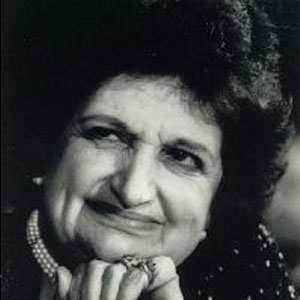 Helen Thomas was born in Winchester, Kentucky in 1920, one of nine children of an immigrant Lebanese family. Thomas graduated from Wayne State University in 1942, majoring in English. She moved to Washington, D.C. to begin a journalism career and struggled for years in a competitive field. She served as copy girl for the Washington Daily News, wrote radio copy for UPI, and covered desegregation activities at the Department of Justice in the late 1950s.

Originally assigned to cover Jacqueline Kennedy during the 1960 presidential campaign, she “assigned herself” as one of UPI’s three White House correspondents after the election and covered that beat for every administration until President Barack Obama’s. In 1974, she published Dateline: White House.

Recipient of nine honorary degrees, Thomas has been honored by her peers with many journalism awards, including the National Press Club’s Fourth Estate Award and membership in the Gridiron Club, a formerly all-male journalism fraternity. She was also president of the White House Correspondents Association and was named a “fellow” in the Sigma Delta Chi journalism fraternity.

Both her profession and the public it served saw Helen Thomas as a journalist with a conscience and compassion who pursued the truth and communicated it.