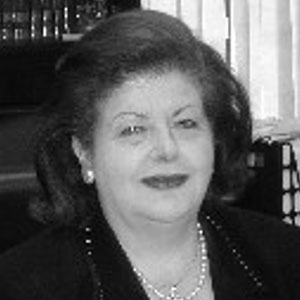 Dr. Haifa Fakhouri, who immigrated to Michigan from Jordan at age 23, is the founder, president, and CEO of the Arab American and Chaldean Council (ACC)-the nation’s largest community-based, human-service organization dedicated to the Middle Eastern community. Under her strong leadership, the ACC has grown from one location in 1979 to 39 outreach offices today assisting 80,000 individuals, families, and agencies throughout metropolitan Detroit. ACC services include counseling, health care, employment training and job placement, translation, interpretation, immigration, and youth services.

In the early years of the ACC, Fakhouri also served as a special advisor to the United Nations on the status of women and populations policies in the Middle East. Trained as a sociologist and educator, she has authored several studies and publications, including ‘Arab American and Chaldean Community’ (1980), ‘Arab Women’ A Changing Status’ (1975), and ‘Position of the Role of Working Women in Amman, Jordan’ (1974).

A graduate of Wayne State University, Fakhouri’s passion and long-range mission is to foster a vibrant, productive, and multi-ethnic community in Detroit. As master planner of a $37-million development project called the Community and Neighborhood Development Initiative, she led the effort to construct the ACC Headquarters and Youth Recreation and Leadership Center and a planned Artisan Center, fostering a new concept of reconstruction and improvement in the area.

With compassion and vision, Fakhouri has guided the ACC in its efforts to meet the needs of people of culturally diverse backgrounds and thereby improve the quality of life for all.