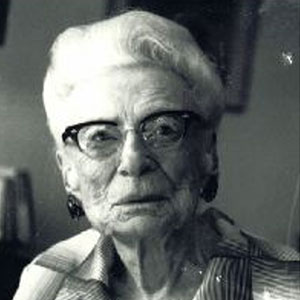 Elmina Lucke’s pioneering efforts at serving the needs of the foreign-born citizens of Michigan and in the field of International Social Work remain a model for similar programs today. She was the founder and first director of the Detroit International Institute which was initially organized under the auspices of the National Board of the YWCA. In 1922, as a result of this experience, she became the first woman accepted for doctoral study in the field of International Law and Relations by Columbia University. After her graduation, Dr. Lucke was asked to help found an innovative high school in her hometown of Carleton, Michigan. Later she taught at the Lincoln School of the Teachers College of Columbia University in New York, a position she occupied for almost 20 years. During this time, she also served on the board of the American Council for Nationalities Service, a body which she helped organize.

In 1947, at the request of the YWCA of America, Dr. Lucke traveled to India to assist in the development of a training program in social work for young women. While in India she met and became a close friend of Mahatma Gandhi who assisted her work, the result being the establishment, at the University of Delhi, of the first graduate school of social work in that nation. Later she also organized a national social work education program in Pakistan under the United Nations Technical Assistance Program.

Her personal friendship with Mahatma Gandhi and her innovations in social work created a lasting impression on the people of India, where her letters have been published and where she is recalled as one of the Mahatma’s ‘adopted daughters.’

After returning to this country, Dr. Lucke was awarded an Honorary Doctorate by Oberlin College, in which she was cited for the ‘building of friendships between people and peoples.’