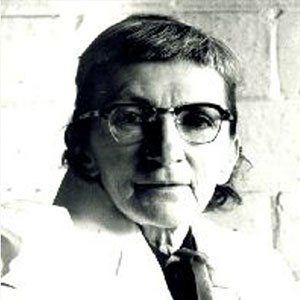 An inspired teacher and authority on the anatomy of the brain, Elizabeth Crosby contributed to science in three areas. Her careful descriptions of reptile and other vertebrate brains helped to outline evolutionary history. Her clinical diagnostic assistance to neurosurgeons resulted in the correlation of anatomy and surgery and her textbook in this field is still a staple for neurosurgery students. Thirdly, her teaching reached 8500 medical students at the University of Michigan and produced many of today’s outstanding neurosurgeons.

Dr. Crosby received her Ph.D. from the University of Chicago in 1917, possibly inspired by the feminist drive to higher education which accompanied the women’s suffrage movement early in the century. Despite not having a medical background, she became pre-eminent in neuroanatomy, was the first woman to receive a full professorship in the University of Michigan Medical School, and the first to receive the University’s Distinguished Faculty Achievement Award. Her long career was marked with achievement as she laid the foundations of neuroscience, a field now burgeoning as a result of the interdisciplinary questions asked by Crosby and others. Crosby taught, assisted in diagnosis, published, and lectured throughout the world for over sixty years. She received the National Medal of Science Award from President Carter in 1979, one of 20 so honored, and is remembered by biologists and medical doctors alike as one of the world’s foremost authorities on neurobiology.