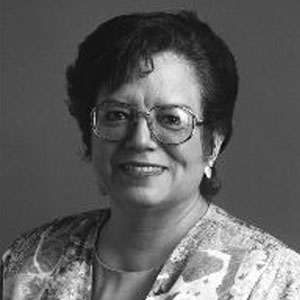 Yolanda Alvarado-Ortega’s life as a pathfinder began in 1969 when she was left with three children to raise by herself without financial support. She moved from Texas to Michigan and rapidly took up a role in community leadership. The early 70s were years of the young Civil Rights Movement, and Hispanics lost no time in discovering her talent for organization and writing. Her first public appointment was to the Human Relations Commission in Holland, Michigan, where she demanded that Holland hire Hispanic firemen.

By 1972, Alvardo-Ortega was living in Lansing and working as an assistant editor for a statewide Hispanic newspaper El Renaciminto. This led to a full-time job as a reporter at The Lansing State Journal. During her early years at the State Journal, she continued to work behind the scenes for civil rights. She was newsroom community outreach coordinator and also interacted with students in Michigan State University’s Hispanics in Journalism Program to provide individually tailored career guidance.

Her experiences raising a manic-depressive daughter led her to realize that existing community and state mental health services were failing patients and their families. To remedy this, she coordinated the handbook Mental Illness-A Family Resource Guide, which was illustrated by her daughter. Thousands of copies have been distributed statewide to mental health agencies. In 1993, Alvardo-Ortega presented the Wrap-Around Service Model, which had an impact on reform in Michigan as well as in other states. Her work in the mental health arena helped create positive changes in service delivery to families and clients trying to cope with mental illness.

Alvarado-Ortega has distinguished herself as a Hispanic, a woman, and an advocate in mental health, media, community service, and equality and diversity in the workplace. She has been honored with many awards, including the Sondra Berlin Civil Rights Award, 1990; Diana Award in Communications, 1982; and the Hispanic Women in the Network Distinguished Service Award, 1990.