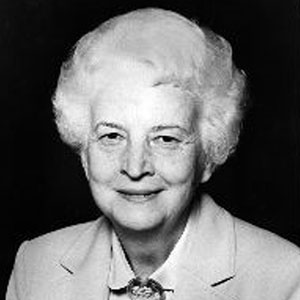 Virginia Allan, a native of Wyandotte, Michigan, had a distinguished career as an educator, businesswoman, civic leader, and stateswoman. As an educator, she pioneered with Detroit’s Job Upgrading program to help dropouts return to school or find meaningful employment. After establishing four job centers, she was named an assistant principal of Redford High School. For 15 years, she was also the co-owner and executive vice president of Cahalan Drug Stores in Wyandotte.

In 1964, she was appointed a regent of Eastern Michigan University by the governor, a position she held for 10 years. In 1969, she was asked to chair President Nixon’s Task Force on Women’s Rights and Responsibilities and, in 1972, was named deputy assistant secretary of state for public affairs. Her responsibilities in this office included development of new and improved working relationships between the State Department and local, regional, and national non-governmental organizations representing the range of public interests in U.S. foreign relations.

During her five years in the State Department, Allan also became a much-traveled proponent of human rights, placing special emphasis on equity for women in this country and its policy implications internationally. She was a member of the U.S. delegation to the World Conference for the International Women’s Year in Mexico City and the Mid-Decade Conference for Women in Copenhagen.

Allan was a past president of the National Federation of Business and Professional Women. While in office, she originated the concept of a nationwide network of state commissions on the status of women, an idea which grew out of her experience as a member of the first Michigan Women’s Commission.

From 1977 to 1983, Virginia Allan headed the Graduate School Women’s Studies Program at George Washington University. She also served as co-chair of the Citizens Council on Women’s Education.

Allan graduated Phi Beta Kappa from the University of Michigan and received the university’s Outstanding Achievement Award in 1964. She was listed in Who’s Who of America and counted among her several distinctions honorary doctorates of laws, letters, and public administration from Olivet College, Central Michigan University, and Eastern Michigan University respectively.