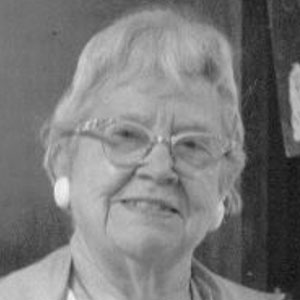 Verne Burbridge is proof of how one person can make a difference in the lives of many. She spent 39 years of her life, all after the age of 66, volunteering her services and bringing a positive light to those around her. Upon Burbridge’s retirement from her voluntary duties in 2001 at the age of 105, she had provided over 25,000 hours of service.

Burbridge began her volunteering career in 1963 by donating her services one day a week to assist the World Medical Relief with packing medical supplies for overseas shipment. In 1972, she joined the volunteers at Mt. Carmel Mercy Hospital (now Sinai-Grace Hospital) through the Retired Senior Volunteer Program. For the next 29 years, Verne Burbridge spent three days a week pushing a gift cart to the 180 rooms on all six floors of the hospital. To get to the hospital each day by 7:00 am, Verne had to take three buses. She only missed one day of ‘work’ between 1972 and 1996, when bus service was cancelled due to excessive snow. When she turned 100 years old in 1996, the hospital provided Burbridge with a driver so that she would no longer have to rely on the bus to get in each morning. This remarkable woman accumulated over 18,000 hours as a hospital volunteer.

Burbridge’s extensive volunteer service earned her much praise and numerous awards. She received the Outstanding Service to the Community Award from the American Association of Retired Persons, the Golden Oldie Award from the Metropolitan Detroit Heritage Club, the Aging in the Future Geri Award, Grace Hospital’s 1993 Volunteer of the Year, the Heart of Gold Award from United Way of Southeastern Michigan, the Golden Rule Award, and the Heart of Gold Award. Her fine work and extreme dedication to community service was well covered in the media including the Detroit Free Press, the Modesto Bee, and the Dallas Morning News.

Not only did Verne Burbridge help and comfort those she came in contact with each day, she was also an inspiration to countless others. Her devotion to her community and her neighbors serve as a reminder to us all that we can each make a positive contribution.