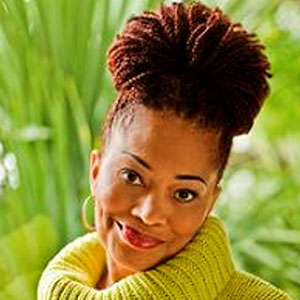 Born the oldest of five children, Terry McMillan was first introduced to literature at age 16 working at her local Port Huron library. She received her BA in journalism from the University of California Berkeley and attended the MFA Film Program at Columbia University in New York.

McMillan writes upbeat novels about contemporary black women and their dynamic role in relationships, which lead to her becoming A New York Times bestselling author and pioneer of the new African-American romance genre.

When McMillan’s first novel Mama (1987) was released publishers did not believe an African-American audience existed for literature. McMillan took charge of promotion for Mama and proved them wrong. Mama received the American Book Award by the Before Columbus Foundation. McMillan’s best-known books, Waiting to Exhale (1992) and How Stella Got Her Groove Back (1996), have sold millions of copies and were made into major motion pictures. Her novel Disappearing Acts (1993) was made into a television feature on HBO. The high school graduation of McMillan’s son, Solomon, inspired her book, It’s OK if You’re Clueless: and 23 More Tips for the College Bound (2006). This year McMillan’s latest book, Getting to Happy (2010), was released. McMillan’s recognitions and awards include the Lifetime Achievement Award at the 2008 Essence Literary Awards and the Doubleday/Columbia University Literary Fellowship. McMillan was ninth on the African American Literature Book Club’s Favorite African American Authors of the 20th Century list.

McMillan prides herself on writing about real people and real situations, never portraying her characters as victims, but rather as true-to-life, working-class Americans.