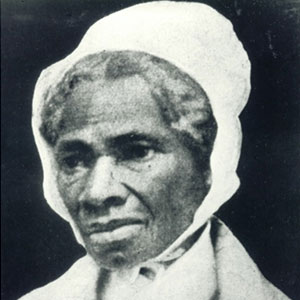 The woman known as Sojourner Truth, a legendary crusader for the cause of human rights, was born into slavery in New York as Isabella Baumfree in the year 1797. In 1827, she escaped from her owner and took refuge with a Quaker family with whom she resided until the New York State Emancipation Act was approved a year later.

Baumfree took her new name–Sojourner Truth–in 1843 when, as she later said, she felt a “call” to travel and preach on emancipation. She toured the country over the next number of years, often wearing a sash reading, “Proclaim liberty throughout the land unto all the inhabitants thereof.” She supported herself through the sale of her autobiography, The Narrative of Sojourner Truth, a work which she dictated to her friend Olive Gilbert. Truth never learned to read or write but was, nonetheless, an intelligent woman with a quick wit and an intensely engaging personality.

In 1850, she met Elizabeth Cady Stanton and other feminists of the day; thereafter, she added the cause of women’s rights to her lectures, delivering her famed “Ain’t I a Woman?” speech at a convention in Akron, Ohio the next year.

At the invitation of Quaker friends, Truth moved to their village of Harmonia, Michigan on the outskirts of Battle Creek in 1857. Although she continued to travel widely, Battle Creek would thereafter be home to Truth, her children, and grandchildren.

During the Civil War, Truth worked tirelessly to ensure that troops of color were treated fairly, even assembling care packages for them on Thanksgiving Day. She met with President Abraham Lincoln in Washington, D.C. and, in 1865, sued and won a judgment against a streetcar company that led to the desegregation of such conveyances. She also served as a counselor to freed slaves in Virginia–helping to provide them with the skills needed to achieve self-sufficiency.

Leg ulcers forced Sojourner Truth to return to Battle Creek for good in 1875. Though treated by a variety of practitioners including Dr. John Harvey Kellogg, she died on November 26, 1883. She is buried in Battle Creek’s Oak Hill Cemetery.