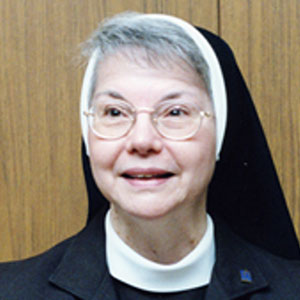 A native of Detroit, Sister Mary Francilene Van de Vyver served her community, her students, and her God for 60 years.

After taking vows as a Felician nun and earning a doctorate degree from Wayne State University, she taught in the elementary and secondary schools of the Archdiocese of Detroit. In 1974, she was appointed by the Archdiocese to the position of academic dean at Madonna College. A year later, she established landmark programs in sign language studies and, a year after that, at age 35, she was named president of the institution; she then proceeded to guide it through 25 years of extraordinary growth and development.

During her administration, enrollment more than doubled, academic programs grew to 50 undergraduate majors and 18 master’s programs, and the campus expanded to include five new buildings and a technology wing. In 1996, Madonna University became the first institution in the U.S. to offer a graduate-level certificate and master of science degree in hospice.

Under her leadership, Madonna achieved university status and extended its boundaries with the debut of the Center for International Studies and the development of a joint master’s degree with Shanghai Institute of International Finance. In 1987, a committee of college presidents identified her as one of the country’s 100 most effective college presidents in the United States.

Sister Mary Francilene developed equally strong connections with her community, serving on the boards of the Livonia Chamber of Commerce as well as the Livonia Symphony Orchestra.