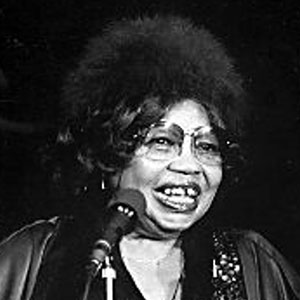 Sippie Wallace, the “Texas Nightingale,” came out of the blues/jazz tradition of the South and was a contemporary of Ma Rainey and Bessie Smith, the reigning queens among blues and jazz vocalists of the era.

Born Beulah Thomas in Houston in 1898, Wallace was singing before audiences when she was seven years old. She achieved star status playing the black vaudeville circuit during the 1920s. Both a songwriter and a performer, Wallace made 48 records for the Okeh label, a recording company that specialized in “race” music, as jazz and the blues were known. Twenty-eight of Wallace’s 48 records for Okeh were hits, among them “Shorty George,” which sold 100,000 copies, the equivalent in today’s market of going platinum.

Recording opportunities decreased for black performers after 1929, and Wallace left the vaudeville circuit when she and her husband moved to Detroit around that time. She continued her performing career, however, in Detroit clubs and cabarets until 1937 when the death of her husband caused her to stop performing altogether. She supported herself by teaching voice and directing church choirs until 1966 when she was “discovered” by Ron Harwood, a 16-year-old college ethno-music major. She re-emerged in the music world to achieve international acclaim, one of a handful of artists still performing in the classic blues idiom. In 1966 and 1967 she appeared at the Newport Folk Blues Festival, at the Chicago Blues Festival in 1967, and at the Ann Arbor Blues Festival in 1972.

A stroke in 1972 interrupted Wallace’s new career, but she fought back from that misfortune and resumed performing intermittently until her death in 1986 at age 88. Perhaps her greatest influence was as a songwriter. Contemporary rhythm and blues and rock and roll have their roots in the blues tradition, and many Wallace tunes have found their way into the R&B vernacular, including her “Women Be Wise,” which was recorded by her good friend, Bonnie Raitt. Wallace speaks to women in her songs, delivering a universal message of love and pain.

Sippie Wallace was an artist, a legend in her time. As a songwriter and performer, she left behind a rich legacy of what has been called America’s only original art form, jazz and the blues.