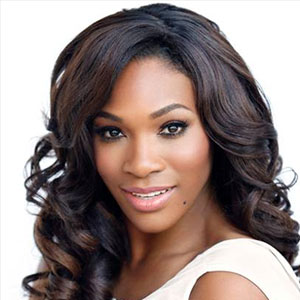 Born to humble beginnings in Saginaw, Serena Williams is a world-ranked tennis player. She is the second women ever to win a Career Golden Grand Slam, winning all four Grand Slams plus an Olympic gold medal in the same year. During her career Williams has won more than 29 career Grand Slams which include over 11 singles titles, 2 mixed doubles, and 10 women’s doubles. Williams won Olympic gold medals in women’s doubles in 2000 and 2008, and she won two additional gold medals at the 2012 London Olympic Games. As of 2012, she was the most recent player, male or female, to have held all four Grand Slam singles titles simultaneously (2002) and she has won more career prize money than any other woman in any sport. Thus, many consider Williams one of the greatest tennis players in the world.

Williams is widely recognized by her first name alone for her remarkable tennis skills, style, power, and beauty. However, it is her off-court activities that have made her one of the most recognizable names and faces in the world. In 2010, Williams was named one of Time magazine’s most influential people in the world for her tennis playing and philanthropic endeavors. Williams works to enhance children’s education in Kenya and the United States. The Serena Williams Secondary School opened in Kenya in November 2008 to provide and increase the educational opportunities for Kenyan youth. In the United States she works with The Owl Foundation by providing funds for programs that address learning problems faced by individuals who experience academic failure. Thus, Williams has established herself as a world class tennis player and a notable philanthropist.