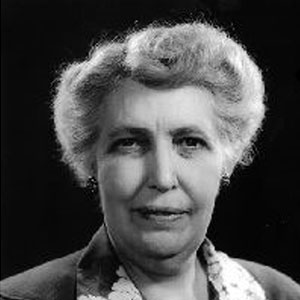 Although women earned the right to vote in the United States in 1920, it was not until 1951, three decades later, that Michigan had its first female member of the U.S. Congress, Ruth Thompson, a Republican from Whitehall.

Thompson’s career of political firsts began with a firing. The self-taught lawyer became Muskegon County’s first elected female probate court judge after running for the position against her employer, Judge Elliott D. Prescott. Upon losing the election himself, Prescott fired her. Moving forward, Judge Thompson became instrumental in advancing the well-being of Michigan’s children. During her 12 years as judge she set a state record for adoptions of orphans and developed a solid record for rehabilitating so-called “bad” boys and girls. Inventor of the “cornfield and kitchen” sentence, she sent delinquents to pleasant family homes for a new start in life. Her record with children also garnered national attention in 1930 when President Herbert Hoover selected her as a delegate to the National Child Welfare Conference in Washington, D.C. Thompson continued her string of firsts by becoming the first woman member of the Muskegon Bar Association and the first woman chair and charter member of the Quadrangle Club – Business and Professional Women in Muskegon.

In 1938 her list of accomplishments grew when she became the first Muskegon County woman ever elected to the Michigan House of Representatives. Holding office from 1938 until 1941, she served on the governor’s Welfare Advisory Board, Social Security Board’s Old Age and Survivor’s Insurance Division, the Labor Department’s Wage and House division, chaired the Women’s Prison Commission of Michigan, and the Michigan Council of Social Work.

In 1951 she continued her trail blazing at the national level as Michigan’s first female Congressperson and by becoming the first woman appointed to the Congressional House Judiciary Committee. She also served on the Joint Committee on Immigration and Nationality Policy.

Judge Ruth Thompson believed in the power of people. She showed this through personal example (during the Depression she took a $1,000 pay cut stipulating the funds go to aid underprivileged children) and by her belief that people could make a difference through the political process: “This is your country, your vote — make the most of it.”

Photo Courtesy of The Muskegon Chronicle