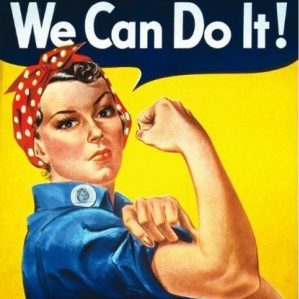 Rosie the Riveter is inducted into the Michigan Women’s Hall of Fame in honor of all women who went to work in industrial factories and shipyards in Michigan during World War II. Commonly connected to Rose Will Monroe, an employee of the World War II Willow Run Bomber Plant in Ypsilanti Township, Rosie the Riveter is an American icon created when the United States was desperate for women to join the war effort.

Rose Monroe migrated to Michigan and worked as a riveter building B-24 Liberator Bombers. She fit the description of the worker described in the song “Rosie the Riveter” so well that she was tapped to appear in films and posters encouraging women to go to work in support of the war effort. Rose Monroe came to represent the class of women known as Rosie the Riveter and together they achieved prominence within the state and throughout the nation. Rosie the Riveter wore the confidence of her skills and abilities on her determined face. She inspired a generation of women to enter the industrial workforce at a time when they were desperately needed. She succeeded, but more importantly, all women succeeded.

At the Willow Run Bomber Plant, women were paid equal wages as those of men, helping to advance women’s rights in the factory. Today, Rosie the Riveter exemplifies the skills, strengths, and stamina to be successful in any undertaking. She continues to inspire generations with a “We Can Do It” spirit.