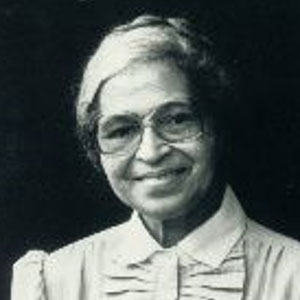 Rosa Parks made history not just because of what she did, but because of what she refused to do. On December 1, 1955, Mrs. Parks boarded a bus in Montgomery, Alabama, after a long day’s work as a seamstress. When the bus driver called out, “Niggers, move back,” Rosa Parks refused. Her eloquent “No” sparked a 301-day boycott of the Montgomery bus system by Black citizens and her moment of personal courage helped inspire twenty years of civil rights reform, not only in Alabama but across the nation.

Rosa was born in Tuskegee, Alabama. She met Raymond Parks in 1931 and they were married the following year. Both Mrs. Parks and her husband were active in the National Association for the Advancement of Colored People. In 1957, Rosa, her husband, and her mother moved to Detroit to join her brother Sylvester who was already living there. In 1965, after supporting the candidacy of John Conyers for Congress, Rosa Parks joined Conyers’ staff as an assistant in the congressman’s Detroit office. She worked for Congressman Conyers for more than 15 years and continued her active involvement in the office even after retirement.

Rosa Parks’ life story was chronicled in the magazine supplement to the Detroit Free Press, on November 30, 1980. She has received numerous awards and tributes, including the Martin Luther King, Jr. Non-Violent Peace Prize and the Distinguished Service Award of Delta Sigma Theta, a national sorority of Black professional women. She has also had a major street named in her honor in Detroit and a scholarship fund which is intended to help Michigan students who display potential for the kind of courage and leadership Mrs. Parks evidenced in Montgomery in 1955.