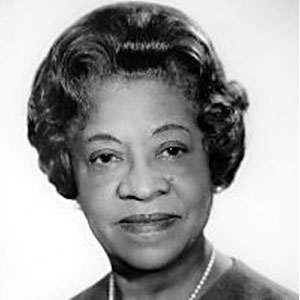 Louise Grooms served as chief accountant and office manager of Great Lakes Mutual Life Insurance Company for 15 years before founding the Detroit Institute of Commerce in 1941. She was instrumental in launching the Victory Loan and Investment Company, an early step in the creation of responsible financial institutions for black people. For 25 years she worked as a Director and as a Secretary of this company.

Her association memberships include- being elected secretary of the Booker T. Washington Business Association for 15 years; chairperson of the Lucy Thurman Branch of the YWCA, member of both the State Advisory Council on Vocational Education and the State Board of Education’s Task Force on Equality of Access to Higher Education.

In founding the Detroit Institute of Commerce, R. Louise Grooms made a major contribution to Michigan and its future. Fifty-four years later the Institute still thrives, even in Groom’s absence, as she had helped train thousands of students. She funded the Institute herself as a means for black students to receive training in fundamental business courses as well as instruction in basic office etiquette. Her efforts provided access around the barriers that held blacks out of business careers. The resulting DIC opened the door to opportunity for people for whom educational alternatives did not exist.

Richard H. Austin, former Secretary of State of Michigan for many years, remembered Louise Grooms “. . . as a perfectionist and an extremely hard worker who had a great positive influence on young people. She inspired those who worked for her, her students, as well as her business associates.”

Austin went on to say, “Her experience as office manager for Great Lakes Mutual showed her that many young black applicants for jobs suffered from inadequate preparation for clerical and accounting work.” She opened the Institute to address that problem. ” I also remember Louise,” he said, “as a silent warrior for women’s rights and equal opportunity for blacks and other minorities. She was a pioneer.”

In 1970 R. Louise Grooms was named as one of the Top Ten Working Women in Detroit. She received the prestigious Salute to Distinguished Warriors from the Detroit Urban League in 1984.