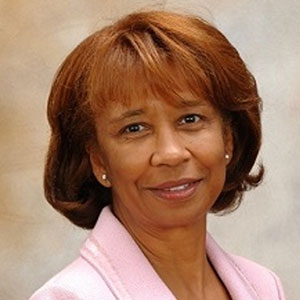 Paula Cunningham started her career with Lansing Community College (LCC) in 1981 as an associate professor. She rose through the ranks at LCC to become the school’s first female president. While leading the ninth largest single campus community college in the nation, Cunningham successfully led a millage increase to support the college and funding for LCC’s five new buildings, including an alternative energy initiative. She also forged partnerships with other academic institutions and businesses to build a new University Center which created additional educational access for students.

In 2006, Cunningham became the first female president and CEO of Capitol National Bank. During her tenure, Cunningham successfully led the bank through Michigan’s worst recession in 70 years. She is also the first African American woman to be chair of the Lansing Regional Chamber of Commerce.

Cunningham has used her position to help create opportunities for others. She created the Young Entrepreneurs Council, which supports young entrepreneurs in the region; established a women’s network called W3 ‘Wine, Wisdom, and Women’ which helps women learn more about trusts, wills, and finances; housed and hosted business opportunities for networking with Chinese students at Michigan State University; and worked with the local school districts on creating financial literacy programs for students. In 2012, she founded the Learn Live Lead Entrepreneurial Academy (L3), a public school academy for students in grade K-6. She co-founded the Imagine Fund which was created to assure college scholarship opportunities for young women and people of color.