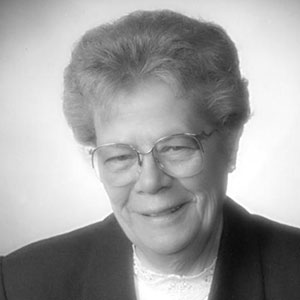 Another woman might have been satisfied with being elected the vice-president of a well-respected international union (the United Auto Workers); but that wasn’t enough for Odessa Komer. While she had achieved the highest post of any woman in Michigan, in an overwhelmingly male union, (she was the only woman on the United Auto Worker’s International Executive Board along with 20 men) she believed she could go further. She argued, “I get equal pay – I want equal responsibility” as she sought and was assigned major collective bargaining assignments.

Komer started her climb as a member of UAW Local 228 in 1953 when she became an assembler at the Ford Sterling Plant. During her 14 years with this 7000-member local she was elected to numerous leadership positions, culminating with the post of recording secretary. Each time it was a “first” in the local’s history to have a woman filling the job.

She participated in all phases of bargaining, both grievances and contracts. In 1964 while serving on the local bargaining committee, she was responsible for getting a clause into the contract that made seniority a consideration in better job assignments. Three years later that clause was incorporated into the national Ford agreement.

In 1967 Odessa Komer was appointed to the staff of the international union as education director of its 100,000-member Region I in Michigan. The UAW convention elected her to an international vice-presidency in 1974 and returned her to that office at each convention until her retirement in 1992.

Some of her major contributions are highlighted in her leadership in the UAW drive to launch women’s councils and women’s conferences across the United States. Under Komer’s direction, each year a new group of 200 local women attend a major women’s conference of intensive training at the UAW Family Education Center. This support structure has paid off; UAW women got elected to top local union posts in roughly the same proportion as their membership, a rare accomplishment in any organization.

With the jobs of 22 million women workers at stake, Odessa Komer led the UAW challenge to corporate policies that removed women of child-bearing age from dangerous areas, insisting that those areas be safe for all workers. Her battle was waged all the way to the U.S. Supreme Court and the UAW position was upheld.

The achievements and involvements of Odessa Komer are many and varied. They include: Board of Trustees of Macomb Community College and the first woman president; Advisory Board, National Organization for Women; National Vice-President, Coalition of Labor Union Women; Advisory Board Member of Women’s Occupational Health Resource Center; Advisory Board Member, National Women’s Political Caucus; and Member of President’s Advisory, Committee for Women, appointed by President Carter. Governor Milliken appointed her to the powerful three-person Brown-McNeely Malpractice Insurance Commission (1975-1980), the only woman serving with two medical doctors. In 1980-81 she was appointed to the Governor’s Task Force on Prison Reform.