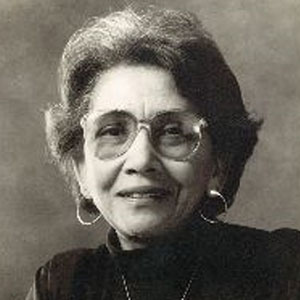 A professional poet since 1941, Naomi Long Madgett built her career on helping other poets. As an English teacher at Detroit’s Northwestern High School, Dr. Madgett introduced into the curriculum the first accredited classes in African American literature and creative writing. She was also a leader in the drive for fairer representation of African Americans in textbooks. In 1965-1966 Dr. Madgett became the first Mott Fellow in English and worked as a research associate at Oakland University. Besides enhancing and encouraging her students’ writing, Dr. Madgett nurtured new poets as editor and publisher of Lotus Press, Inc. Since 1974 the Detroit resident has published 84 collections of poetry, most by African Americans.

The Virginia-born Dr. Madgett is the poet laureate of Detroit and a professor emerita of English at Eastern Michigan University, where she taught African American literature and creative writing from 1968 to 1984. Since Dr. Madgett was 17, she has published eight volumes of her poems, including Octavia and Other Poems, Remembrances of Spring: Collected Early Poems, and Exits and Entrances. Her work has been published in magazines, journals and more than 160 anthologies around the world.

Dr. Madgett also has written several textbooks and instructional texts for teachers, including A Student’s Guide to Creative Writing and Teachers Guide for Deep Rivers: a Portfolio by African Americans. She also has edited two poetry anthologies including Adam of Ife: Black Women in Praise of Black Men. Additionally, from 1993 to 1998, Dr. Madgett was poetry editor for the Michigan State University Press. Called a “godmother” of emerging poets by the Detroit Free Press in 1998, Dr. Madgett has received the American Book Award in the publisher/editor category and was inducted into the National Literary Hall of Fame for Writers of African Descent at Chicago State University in 1999. She has also won the National Council of Teachers of English Black Caucus Award and the Michigan Artist Award. Dr. Madgett established the annual Naomi Long Madgett Poetry Award.