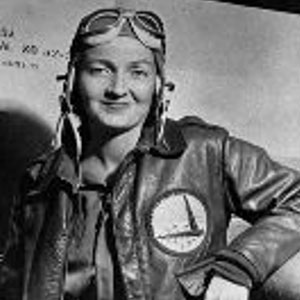 An angel of the airways, Nancy Harkness Love was responsible for women becoming ferry pilots during World War II. Born Nancy Harkness in Houghton, Michigan on February 14, 1914, she was bitten by the flying bug at age twelve, when she took a ride in a barnstormer’s airplane. She earned her own pilot’s license at the age of sixteen. Nancy Harkness met her husband, Robert L. Love, in the early 1930s, after taking a job with his fledgling airline company. Because of the poor depression-era economy, plane sales were slow and soon Love embarked on a second career as an air marker, painting directional flight markers on rooftops. In the late 1930s she proved to the world that women pilots were capable of doing the more dangerous aspects of flying when she flew as a test pilot for Gwinn Air Company. She did extensive testing of landing gear, especially “tricycle” designed gear. Competition also beckoned her and in 1936 and 1937 she took part in National Air Races, one in Los Angeles and the other in Detroit. After finishing second in the Detroit race Love vowed never to race again.

As World War II crept closer, the need for aircraft in Europe grew. Love suggested utilizing women to ferry aircraft from factories to military airfields, but her dream would not become reality until 1942. When the idea was finally accepted, Love was named a commander and the WAFS (Women’s Auxiliary Ferry Pilots) came into being. Later the WAFS became the WASP (Women’s Airforce Service Pilots). Love and her women pilots had an uphill battle to be accepted. While men recruited from civilian life could be from 19 to 45, women pilots had to be between the ages of 21 and 35. Women had to have a high school degree, but men only needed three years of high school. Male pilots flying requirements were reduced to 200 hours of flying, down from an original 300 hours. Women, on the other hand, were required to have a minimum of 500 hours. In spite of all of these requirements, women were allowed to fly only the smallest trainer and liaison airplanes. Additionally, men could get a commission after a 90-day training period; women, however, remained civilians. Having proved their skill, WASPS later flew the fastest and largest fighter planes in the world.