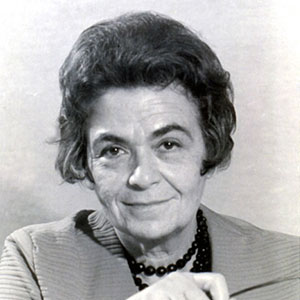 Born in Montreal, Quebec in 1914, Myra Wolfgang moved to Detroit as a child. As her family struggled to make ends meet during the Great Depression, she left college and went to work. When she walked into the Detroit office of the Hotel, Motel and Restaurant Employees Union looking for a job, phones were ringing off the hook and she answered them. By the end of the day, she had earned herself a job as the office manager, thus beginning her career in labor unions.

At the union office, Myra helped members settle complaints with their bosses. She organized picket lines and sit-down strikes in a ceaseless effort to achieve a decent wage and benefits. Her work drew national attention, particularly her role in the Woolworth stores sit-down strikes. In 1937, she was appointed to the Michigan Unemployment Securities Commission. She accepted, but eventually returned full-time to her beloved union, where she felt she could do the most good.

Though Myra was well known for ensuring that women and minorities were treated fairly in their positions, one of her most notable accomplishments was persuading Michigan legislators to pass a minimum wage law in 1966 of at least one dollar an hour. While that amount may seem small by today’s standards, it was the product of countless hours of strikes and struggles. She also was a founder of CLUW, the Coalition of Labor Union Women, the first national trade union women’s organization.

Through the years, her triple role as a labor leader, wife, and mother made her appreciate her members’ struggle to balance work and life, and many of the benefits she gained for them reflected that.