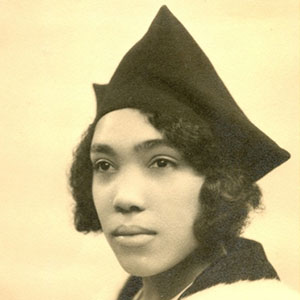 Merze Tate was born February 6, 1905, in Isabella County, Michigan. She is a descendent of African American pioneer settlers who came to the region in the 1860s as farmers and lumbermen. Tate attended Blanchard High School, a one room school situated on a corner of her parents’ farm. She graduated from Blanchard, which went only to the tenth grade, with an A record. She took her last two years of high school in Battle Creek maintaining an A record.

Tate received the Master of Arts degree from Columbia in 1930. In 1931 an Alpha Kappa Sorority Foreign Fellowship of $1000 allowed her to enter Oxford. In 1935 she became the first African American to be awarded a Bachelor of Literature degree by that institution. In 1941 Tate received a doctorate from Harvard.

Tate’s Oxford dissertation, a study of the limitation of armaments, formed the basis for continuing scholarly work on the subject. Her second book, The United States and Armaments, was widely used by the Department of State and by the Committee for World Development and World Disarmament. In 1984 the Department named Dr. Tate one of three Americans to represent the United States at a UNESCO Seminar.

Merze Tate has had a distinguished academic career. She was Dean of Women and a history instructor at Barber Scotia College in Concord, North Carolina for the academic year 1935-36. She then went to Bennet College as chair of social science. In 1941 she was appointed Dean of Women and associate professor of political science at Morgan State College. In 1942 Dr. Tate became professor of history at Harvard University where she and Dr. Caroline Ware were the first women faculty members in the Department of History.

Dr. Tate was described as the consummate scholar. She published five volumes on international affairs and more than forty articles and monographs, and traveled widely around the world visiting and meeting with leaders in the Soviet Union, India, Cambodia, Australia, New Zealand, and 11 African countries. Her achievements were recognized with some 15 awards which include Isabella County’s Most Distinguished Citizen Award in 1964 and the 1981 Distinguished Alumni Award of the Association of State Colleges and Universities.

Professor Tate was also a philanthropist who established funds at three institutions that assisted her in her profession: Western Michigan University, Radcliff College, and Harvard University.