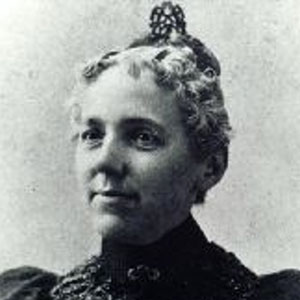 May Stocking Knaggs was one of Michigan’s most prominent suffragists. Described as a ‘logical and convincing speaker’ by the Detroit Free Press, Knaggs was a well-known and popular women’s rights advocate. Her belief that men and women should be viewed as equals both in responsibility and opportunity was a rule by which she lived her life. In fact, her husband remained at home caring for their four children while May was away on her cross-country speaking engagements.

May Stocking Knaggs was originally from New York, but she lived most of her adult life in Bay City, Michigan. She wrote about women’s issues and women’s rights in the Bay City Tribune, and she was one of the first two women elected to the Bay City Board of Education. Knaggs was an ally and friend of Susan B. Anthony, and the two women often lectured together. In 1894 they traveled through New York making 60 speeches. May was president of the Michigan Equal Suffrage Association from 1895 to 1899 and served as the chairperson of the press committee for the convention of the National Women’s Relief Corps held in Detroit. In 1896 and 1899 she spoke at the National Suffrage conventions. She corresponded with Clara Arthur, exchanging thoughts and ideas through a three-year period, 1907 to 1910. In 1887 Knaggs addressed a committee of the state legislatures urging them to extend suffrage to women. She argued that ‘first, property-holding women are taxed without representation [and] second, the interest of man and woman are identical.’

Although her ideas of equal education and equal political rights for women were extreme at the time, May Stocking Knaggs was prominent and well-respected, especially in her hometown of Bay City. As the Sag-Harbor Express (New York) wrote of her, she was “a very gifted woman, clear and logical in her style of thought, and exceedingly modest and pleasing in the presentation of her subject.”