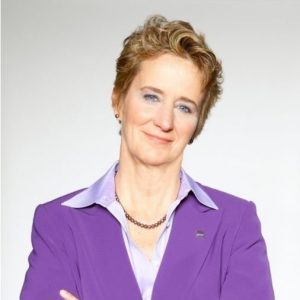 Mary Kay Henry is the first woman president of the two million-member Service Employees International Union (SEIU). After graduating from Michigan State University in 1979 with degrees in Labor and Industrial Relations and Urban Policy and Planning from the James Madison Honors College, Mary Kay began working at SEIU, one of the few unions hiring women as organizers at the time. As a researcher in California, she worked with janitors, public employees, and health care workers.

In 1986, Mary Kay served as coordinator for the strike at Kaiser Permanente hospitals (then the nation’s oldest and largest health maintenance organization) in Northern California that led to the most successful labor-management partnership in the nation. Since then she has held many positions within SEIU including: Director of Healthcare Division (1993), Southern California Organizing Director (2000), SEIU International Vice President (2004), and SEIU President (2010).

During her time at SEIU, Mary Kay helped pioneer SEIU’s use of card check agreements, non-traditional collective bargaining agreements, and system-wide health care organizing strategy. She has been Instrumental in Fight for $15 and a Union; in less than four years, more than 11 million Americans have won wage increases. In 2015, she was named one of Washingtonian’s most powerful women in Washington. Mary Kay is also the co-founder of SEIU’s Lavender Caucus, a gay and lesbian group within the international union dedicated to improving rights for LGBTQ people within unions and at the workplace.