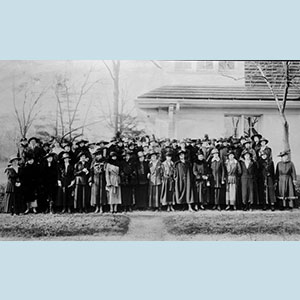 The story of the Mary Free Bed Guild begins in 1891 when a small group of women wanted to help people who couldn’t afford health care. They passed a little black purse asking anyone named Mary – or anyone who knew someone named Mary – to donate ten cents. Because Mary was the most popular female name at the time, the group soon raised enough money to endow a bed at a local hospital, which became known as the “Mary free bed.”

There have been groundbreaking accomplishments since that one bed. The Mary Free Bed Guild opened the area’s first pediatric orthopedic clinic, brought the first physical therapist to Grand Rapids, worked with the Grand Rapids Public Schools to establish educational services for children with disabilities, received designation as an orthopedic center by the Michigan Crippled Children’s Commission and became a national leader for treating children with limb differences.

The 120 women of the Mary Free Bed Guild govern Mary Free Bed with majority representation on all boards and committees. Since 1985, the Guild has donated more than $21 million to multiple community organizations dedicated to assisting persons with disabilities, including the lead gift for the Mary Free Bed YMCA, the most accessible “Y” in the United States and the world’s first facility to receive Universal Design Certification.