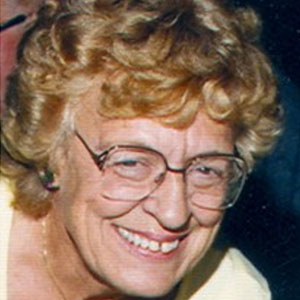 Mary Esther has spent her life working to rectify the inequalities women face. Starting as a member the Ionia Business and Professional Women’s Club, Mary Esther worked tirelessly for the organization. She made an impact on both her local chapter and the statewide organization, becoming president of the state BPW in 1977. She also became the organization’s first archivist, from 1980 to 1993.

Among her many contributions were supporting downtown Ionia revitalization, developing a regional drug abuse education program that was later offered statewide, and chairing the Governor’s Luncheon at the Ionia Free Fair. In this position, she gained a seat for a BPW representative at the head table, ensuring that women would be more visible in the community.

In 1974 she was selected as a finalist by the Governor’s Awards Commission for Distinguished Public Employees in Michigan. For her efforts on behalf of the city of Ionia, Mary Esther received a Certificate of Appreciation in 1977 from Ionia Mayor Fred Thwaites. Gov. Milliken recognized Mary Esther’s abilities by naming her the only woman on the 22-member Michigan Crime Prevention Coalition in 1978.

In honor of the Michigan BPW’s 75th year, Mary Esther co-authored 75 Years: The Courage to Change, a history of the organization published in 1993. Even in retirement, Mary Esther continues to champion women’s issues. From 1995 to 2003 she served on the Board of Directors of the Sarasota County (Fla.) Women’s Legal Fund Family Law Network, and in 1990 she began a 10-year effort in Sarasota, Equity by 2000, to promote unity among women and equity with men by 2000.

Mary Esther’s efforts are felt in the communities she has served and by residents of the entire state, as she strives to improve the visibility and status of women.