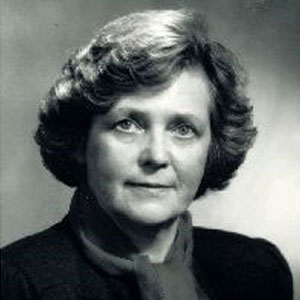 Martha Romayne Seger, Ph.D., is a Financial Economist and Former Governor of the Federal Reserve System in Washington, D.C. (1984-1991). She is now the John M. Olin Distinguished Fellow in the Eller Center for the Study of the Private Market Economy at the University of Arizona, Tucson.

Martha Seger serves on the boards of eight major corporations (including Xerox, Amoco, Kroger, Fluor, Amerisure, and Capital Holding) and is a Public Governor of the Chicago Mercantile Exchange. She serves on the boards of the National Chamber Foundation and the Institute for Research on the Economies of Taxation, both in Washington. In addition, she does consulting and speaking on financial and economic subjects.

Dr. Seger was the first woman ever appointed to a full term on the Federal Reserve Board (appointed by President Reagan in 1984). She was a member of the Federal Open Market Committee, which formulates and implements U.S. monetary policy. She also chaired the Consumer and Community Affairs Committee and represented the Federal Reserve on the National Women’s Business Council as well as the Neighborhood Reinvestment Corporation, serving as its chairperson.

Before entering public service, Dr. Seger taught finance and economics courses at three universities, including her alma mater, the University of Michigan. She took a two-year leave from teaching to serve Michigan as Commissioner of Financial Institutions in 1981-82. Earlier she was in commercial banking for ten years, primarily as Vice President and Chief Economist of Detroit Bank & Trust (now called Comerica).

Dr. Seger was born in Adrian, Michigan, on February 17, 1932. She attended the University of Michigan and earned three degrees, including an M.B.A. and Ph.D. in economics and finance. She is an outspoken believer in free enterprise and the private market economy.