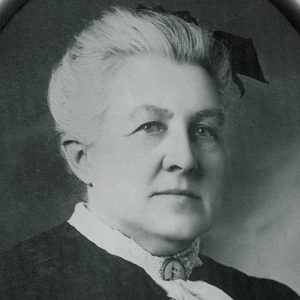 Martha Baldwin (1840-1913) was committed to education and worked diligently to improve her community. Martha became a teacher and educator in the Birmingham area after attending Kalamazoo Baptist College in the 1860s. She worked in the Detroit Public School system from 1872-1898 and eventually became principal at Norvell School, an impressive accomplishment for a woman at the time. Martha was devoted to the Birmingham community and improving the lives of her fellow citizens. She pushed the village council to make progressive changes, formed a beautification society and worked toward women’s suffrage.One of Martha’s greatest contributions to Birmingham is the Baldwin Public Library, which she founded and helped financially support. She also left funds in her will to build a new school with a female locker room to encourage girls in athletics.