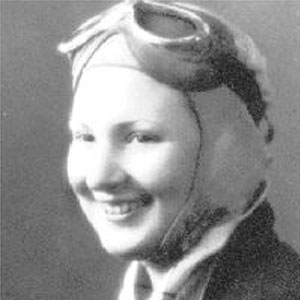 Marion “Babe” Weyant Ruth had been crazy about flying since she was a young girl. She achieved fame as a pilot and instructor, and became one of the Midwest’s most respected authorities on aviation.

As a child Babe spent a great deal of her time at the Lansing airport watching the planes, taking photos, and getting autographs of pilots. In 1933 she received a response from the famed pilot Amelia Earhart telling Babe that if she worked hard, she, too, could be a pilot. Babe Ruth took that message to heart, and a year later, at the age of 16, she received her first flying lesson. In 1937 she achieved her amateur license and her private pilot’s license. In 1941 Ruth qualified for a commercial pilot’s license, and in 1975, still flying over 30 years later, she received an instrument rating license.

Perhaps one of Babe Ruth’s most outstanding achievements was her work during World War II. She was one of just five civilian women who taught instrument flying to male military pilots using the Link Trainer, the precursor of today’s flight simulators. She worked as a flight instructor for years, one of the few women instructors in the US, and passed her knowledge on to hundreds of students. Her lifetime flight hours have accumulated to over 10,000. She served as an Accident Prevention Counselor for the Federal Aviation Association, and developed pilot safety seminars for state agencies, including the Michigan Aeronautics Commission and the Michigan State Police. She ensured that future generations will know of Michigan’s aviation history by recording it.

Babe Ruth had a long competitive racing career. She won third place, against predominately male competition, in the 1938 Bernard McFadden Trophy Air Race; won the Joyce Hartung Trophy in the 1940 Michigan Girl’s Air Show; flew in the all-women’s transcontinental Powder Puff Derby in 1955, 1972, and 1973; and she competed in the International All Women’s Air Race in 1976.