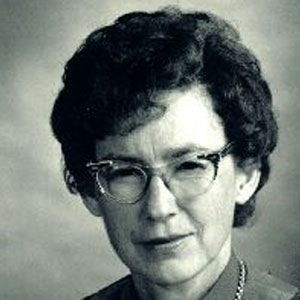 Marion Isabel Barnhart was a distinguished scholar, scientist, and outstanding researcher who made many scientific discoveries which led to a better understanding of such illnesses as stroke, cardiovascular disease, sickle cell anemia, and hemorrhagic disorders.

In the late 1960s, she was the first to use scanning electron microscopy (SEM) to study the pathophysiology of many disease entities. Utilizing SEM, her study of splenic circulation led to a demonstration which settled an international scientific debate on this topic.

Dr. Barnhart was a member of the faculty at the medical school of Wayne State University (WSU) for 35 years. She was not only the first recipient of the University’s Distinguished Graduate Faculty Award but was also the first woman to achieve the rank of professor in the medical school. Her scientific writings include several books and more than 150 papers. She also served as a member of the National Institute of Health Advisory and Scientific Review Committee.

One of Dr. Barnhart’s greatest pleasures was to share the joy of scientific discovery with her students and the worldwide scientific community. However, her enthusiasm and ardor were not spent solely on scientific pursuit. She was a staunch supporter of many causes and was a strong advocate of the Michigan Humane Society. Following her death, David Willis, the Society’s executive director, wrote: ‘The Michigan Humane Society and all the domestic and wild animals it serves lost a true friend…and a truly great humanitarian.’ A brilliant scientist whose pioneering work in hematology at WSU earned many accolades, she will be equally remembered for her gentle and compassionate nature which encompassed a reverence for both human and non-human life. Even as she worked tirelessly to save human lives through her research, she worked quietly behind the scenes influencing colleagues to use fewer animals in their investigations. Everyone who was fortunate enough to know her will miss her and the enrichment she brought to their lives.