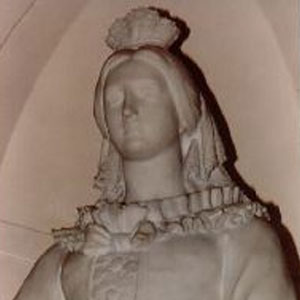 In honoring Madame Cadillac, we honor all those forgotten women of the French colonial period who courageously defied the rules and prejudices of the 17th century world to become the first settlers and pioneers of our state.

Marie-Therese Guyon-Cadillac was the first white woman ever to cross the 750 miles of uncharted and hostile Iroquois Territory (Quebec to Detroit through Lake Ontario) days after the signing of a peace treaty in 1701 between France and the Iroquois forces. This undaunted explorer, settler, and businesswoman risked her life to prove France’s faith in the new treaty. She joined her husband at le Detroit to transform Fort Pontchartrain into a real settlement. As one of only two pioneer women at the fort she took on many responsibilities; including hiring voyageurs and signing contracts. In the absence of a surgeon, as the first lady of the manor she automatically became the colony’s doctor to the 200 habitants and to the four thousand neighboring Indians. Twice, during her husband’s recalls to Quebec, she remained at the fort as a token of the fort’s stability and to staunchly defend the Cadillac’s interests.

According to biographer, Annick Carthew, Marie-Therese’s life is a story of courage and determination, piety, intelligence, business acumen, and outstanding devotion to humanity. She cast personal safety aside to achieve what she believed in; the settling of Detroit. There, she became an example of womanhood at its best, undaunted by danger and prejudice. Without her presence, Fort Pontchartrain would never have grown into one of the nation’s largest cities.