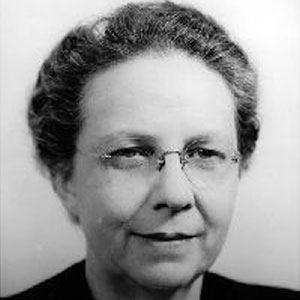 In 1922 Marie Dye became the first woman with a Ph.D. degree to be appointed to the faculty at Michigan State University. That began what became know as “The Dye Era.” She went on to become the first female full professor in the Division of Home Economics (in 1930), and later was appointed Dean of the Division. Her career ultimately spanned thirty-four years (1922-1956).

Her initial assignment was to establish a nutrition research component. To that end, in 1925, she became the first to receive a Purnell Grant through the Agriculture Experiment Station when those funds became available for research. This led to other funds supporting groundbreaking research in the nutrition of pre-school children and the value of vitamin B and C in infant feeding. She started research projects to study the cooking qualities of meats, the color changes in fruits and vegetables during frozen storage, and the use of homogenized milk in cooking, all new concepts for the time. Her vision advanced women, research, and the well-being of families through research, teaching, and service. Her tenure saw the Depression of the 1930s, World War II in the 1940s and the economic expansion and readjustment to post-war living in the 1950s. Through it all she addressed each as a new challenge. Her leadership brought national and international recognition to the College and the University.

Dr. Dye’s perception of her role as leader of the profession was exhibited in the changes she made in the curriculum. When she became dean, she urged a change from the previous philosophy to ‘apply science to the work of the household.’ Instead, she said, ‘Home Economics is a study of the problems of the home and family. Courses must emphasize the civil, moral and economic responsibility to the individual home, to the community and instruct in the right care of human life in the home.’ Just prior to her retirement the aim of college was ‘to help students function effectively and creatively as individuals, as family members and as responsible citizens; to increase their understanding of the art and science of better living, and to prepare them for a profession.’

During her time at Michigan State University Dye opened the Veterans’ Nursery School which still functions as the renamed Spartan Cooperative Nursery School. She served on the Governor’s Committee on Consumer Interests of the Michigan Defense Council and chaired the Michigan Nutrition Defense council during World War II. She also served on the Board of Managers for Sparrow Hospital Association.