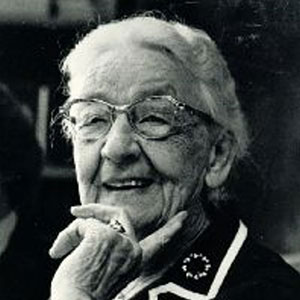 Marguerite Lofft de Angeli was born in Lapeer, Michigan, March 14, 1889. At age 95, the time of her induction into the Michigan Women’s Hall of Fame, she was considered the grande dame of children’s literature in America. She devoted her lifetime to the writing and illustrating of works which have served to shape and form the values of generations of young people. In total, she wrote and illustrated nearly thirty books, the first of which was published in 1935 and the last, Friendship and Other Poems in 1981, when the author was 91.

In addition to her award winning Book of Mother Goose and Nursery Rhymes, an enduring children’s classic, she is said to have broken new ground in the treatment of racial prejudice in 1946 with publication of her book Bright April, a sensitive tale of a modern black child.

Ms. de Angeli left her native state at the early age of 13, but her experiences as a child in Lapeer, Michigan, are said never to have left her but to have continued as an inspiration for much of her later work. Copper-Toed Boots and Butter at the Old Price, are both descriptions of her early life and ably reflect the tone and quality of living and growing up in Lapeer.

In addition to the Newberry Medal, which she won in 1950 for her book The Door in the Wall and the Lewis Carroll Shelf Award for Bright April, Ms. de Angeli was the recipient of two Caldecott Honor Book commendations and the Regina Medal for a lifetime of contributions to children’s literature. She also has had a library named in her honor in her hometown of Lapeer and her birthday is an annual celebration of the Free library of Philadelphia, the city where she resided in later years.