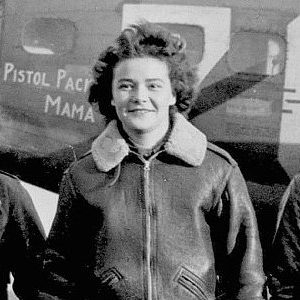 Originally from Ohio, Margaret Kirchner Stevenson(1920-1998) was one of the first women to fly US military aircraft, including the B17 Flying Fortress Bomber. While attending Youngstown College, Margaret and seven classmates bought an airplane and earned their private pilot’s licenses. She was one of 1,830 pilots out of the 25,000 applicants to be accepted into the Women’s Airforce Service Pilots (WASP). On Easter Sunday, 1943, at 22-years old, she reported for basic training at Avenger Army Airfield in Sweetwater, Texas, where she excelled and was chosen to advance to B-17 Bomber Training at Lockbourne Army Airfield in Columbus, Ohio. By completing the B-17 course, the WASP proved that women could fly every type of plane in the military. Margaret and three others were selected to stay at Lockbourne for advanced training, where they completed the B-17 Instructor’s Course and received their instrument and altitude ratings. They were the first to fly the unpressurized bomber above 25,000 feet. In 2010, in recognition for their service, the WASP were awarded The Congressional Gold Medal in Washington, DC. Margaret moved to Michigan, married and became the mother of four. As a single parent in 1955, she earned a master’s degree from Central Michigan University and taught for 30 years with the Saginaw Public School District as a reading specialist, adult education director and elementary principal of five schools.