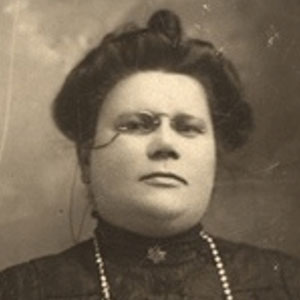 Margareeta “Maggie” Johanna Konttra Niiranen was born in Finland in 1861. She immigrated to the United States at the age of 20, and settled near Houghton, Michigan, where she worked as a domestic servant. She soon changed her name to Walz and began attending night school to learn English. In an era that permitted women few opportunities to work outside of the home, Walz had experience as a door-to-door saleswoman, sales clerk, ticket agent, notary public, and as the operator of a currency exchange. Later in life she worked as the business manager, editor, and publisher of a nationally distributed newspaper.

After earning a business degree from Valparaiso College in Indiana, Walz organized the Calumet Suomen Nais-Yhdistys (Finnish Women’s Society), a group dedicated to the advancement of women. She later traveled across the U.S. establishing other branches of the Finnish Women’s Society. Walz was a founding member of Pohjantahti, a Finnish temperance society in Hancock and was very active in the Finnish immigrant community.

Throughout the years Walz helped many Finnish women immigrate to the U.S. by underwriting their passages, teaching them English, and helping them find jobs in the community. She was able to combine her passion for helping others with her good business skills, by offering interpretation services in business and legal transactions. In 1903, Walz became the federal land agent for Drummond Island, where she established a Finnish colony based on the ideas of temperance, cooperative capitalism, and Christianity.