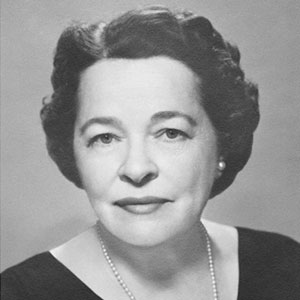 Mabel White Holmes is the inventor of JIFFY baking mixes, America’s first prepared baking mix. JIFFY mixes have been made locally in Chelsea, Michigan since 1930. Today, JIFFY is an internationally known brand.

The company was founded as a flour mill by Holmes’ father, E.K. White, in 1887 and in 1901 was incorporated under the name Chelsea Milling Company (CMC). In 1908, the mill was sold to her father-in-law, Harmon Holmes, and her husband, Howard Holmes began running the business.

Holmes first had the idea to make a prepared baking mix when her sons came home for lunch one day with a friend from school. The boy’s widowed father had packed his lunch with a very flat biscuit and Holmes realized there was a need for families to be able to quickly bake and produce something appetizing. As Holmes’ grandson, the current President and CEO of CMC later put it, “she wanted to save homemakers time in the kitchen and make a mix so easy that even a man could make it.” Holmes wanted her mix to include as many necessary ingredients in the package as possible, excluding only the perishable eggs and milk. She also had the idea to make the packages small enough to produce dinner just for one night, in order to reduce waste and allow customers to have fresh baked goods on a daily basis. The mixes would also be versatile, allowing the baker to use the same package to make various recipes, following a simple set of directions. The name came from Holmes’ childhood, when her family cook would announce that hot biscuits would be ready in a “jiffy.”