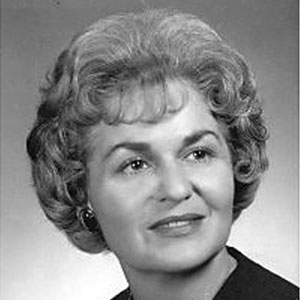 Luise Ruth Leismer Mahon (1926-1975) challenged injustice and raised questions about moral dilemmas through the power of the press.

A longtime champion of Native American rights and land claims, she was the only reporter allowed to cover the Annual Tribal Council Meeting of the Ottawa and Chippewa tribes for 20 years. For her contributions in support of Native American concerns, she became the first white woman adopted by the tribes and was given the name “Te-ba-che-mo-qua,” which means “the writer.” She was later named to serve on Governor George Romney’s first Commission on Indian Affairs.

During her years as a reporter, Mahon also covered issues such as illegal abortions, divorce, child neglect, and programs for people with disabilities. She was the only reporter to win top awards two years in a row from the Michigan Women’s Press Club’s annual journalism competition. Mahon died on December 20, 1975, at the University of Michigan Hospital in Ann Arbor. An award in her name is given annually by the Michigan Women’s Press Club to a member who has done something outstanding in journalism that has affected the lives of others and that exemplifies Mahon’s own pursuits in defense of the undefended.