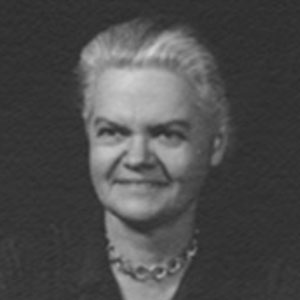 A pioneer in the field of wildlife toxicology, Dr. Lucille Farrier Stickel’s impact on contaminants research continues to serve as scientific basis for pesticide regulation in the United States. Her research on DDT’s impact on the food chain formed much of the basis for Rachel Carson’s Silent Spring.

Dr. Stickel was known as “the bald eagle’s best friend,” and “one of America’s giants in the effort to rescue the [bald eagle] and other large raptors” for her devotion to endangered wildlife.

For nearly 50 years, Dr. Stickel’s career was based at Patuxent Wildlife Research Center near Laurel, Maryland, with her biologist husband, William. She was the first woman to attain the position of senior scientist in the U.S. Civil Service System, and the first woman to head a national research laboratory when she was named director of Patuxent in 1972.

Her awards include the Federal Woman’s Award, U.S. Department of the Interior Distinguished Service Award, and Society of Environmental Toxicology and Chemistry Rachel Carson Award. She is the only woman to receive the Wildlife Society’s prestigious Aldo Leopold Award for wildlife conservation.