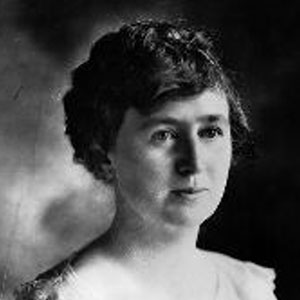 Lucia Grimes and fame met early in the twentieth century when Mrs. Grimes developed and implemented a political strategy during the Michigan suffrage campaigns. She devised a card index filing system to record the attitude of every Michigan legislator toward suffrage for women. This was so successful that Alice Paul invited her to Washington, D.C., to institute a similar system for U.S. Congressional members. Lucia Grimes, with her five-year-old daughter in tow, left for the capitol city in December of 1916 where she installed her card-file system (later called “the pressure system”) at the headquarters of the National Woman’s Party. The Detroit Times reported that “The Woman’s Party, fully informed regarding the history, the financial standing, the political affiliations, the political and social interests of an opponent of the bill and the influences to which he was most susceptible then proceeded to bring pressure to bear upon him.” It took five weeks to complete the national files, and they remained intact and updated until the suffrage amendment was passed.

Lucia Grimes successfully combined family responsibilities and outside work long before it was acceptable for a woman of some means to do so. She was vice-president and purchasing agent for the Grimes Molding Machine Company, an enterprise she and her husband founded in Detroit. When their company’s two purchasing agents enlisted in World War I, Louise stepped in and did the work of both of them. She had been educated as a teacher, worked in one-room schoolhouses before her marriage, and then returned to the classroom at Cass Tech High School in Detroit from 1929 until 1948.

Throughout her long life, Lucia Grimes worked diligently to bring women into the political arena, providing the best possible encouragement–the example of her own life-long participation. She founded the Wayne County Republican Women’s Club in 1919 and was a leader for 50 years. She chaired the Legislative Council of Michigan Women and led the Detroit Women’s Citizen’s League. In 1974 she received the National President’s Award from the Daughters of Founders and Patriots of America. Two days before her 97th birthday, at a rally in Detroit, Lucia Grimes made a speech on behalf of the Equal Rights Amendment.

Some remarks taken from this speech include: “Don’t rest on your oars. Keep working. To those women and men who cling to protective legislation I request you take a look at the people laying the Alaska pipeline. There, under very difficult conditions, men and women are working side by side, doing the same work, earning the same salaries . . .”

In her 100th year, (1977) Grimes was honored by the University of Michigan with the Outstanding Achievement Award for her work as a teacher, business executive, and women’s rights advocate.