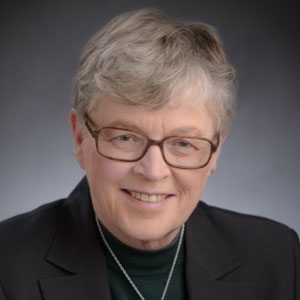 Lou Anna Kimsey Simon of East Lansing is the 20th—and first woman—president of Michigan State University. She leads the university’s work to advance the common good in Michigan and around the world. She began her career at MSU after earning her doctorate there in 1974, starting as an assistant professor in the Office of Institutional Research and promoted to associate professor in 1979. She was named professor of educational administration in 1984. Simon has held a variety of administrative roles at MSU, including assistant provost for general academic administration, associate provost, and provost and vice president for academic affairs. The MSU Board of Trustees appointed her president in January 2005.

As president, Simon has engaged Michigan State in a transformative journey to adapt the principles of the land-grant tradition to 21st-century challenges. She has expanded MSU’s reach in the state and around the world by focusing the university’s strengths on solutions that protect and enhance quality of life, including education, clean water, safe and plentiful food, sustainable energy, and health care.

Research at Michigan State University reflects Simon’s commitment to advancing and applying cutting-edge knowledge. Under her leadership MSU has expanded its research in, among other areas, biofuels and green energy, medicine and medical technology, physics and rare isotopes, safe water, and agriculture to address world hunger.