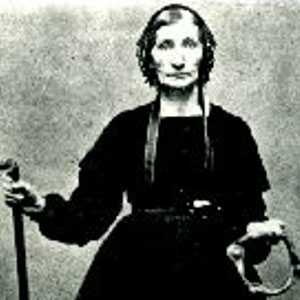 Laura Smith Haviland, (1808-1897) a Quaker woman of normally gentle persuasion, was a pioneer activist in the areas of both civil rights and education. She was instrumental, through her association with the Logan Female Anti-Slavery Society (which she helped found with Elizabeth Margaret Chandler) in establishing one of the first Michigan stations of the Underground Railroad to Canada. It is said that between forty and one-hundred thousand slaves used this route to freedom. So successful was Mrs. Haviland in her role as ‘Superintendent’ of the Railroad that southern slave owners placed a $3,000 reward on her head.

In addition to her work in the abolition movement, Laura Smith Haviland co-founded, with her husband Charles, the Raisin Institute in Raisin, Michigan. Raisin was a school for indigent children and one of the first in the country to admit black students.

Haviland’s concern for the disadvantaged led her also to develop a special concern for the problems of women. She became an outspoken supporter of the women’s suffrage movement and a leader in the organization of the Women’s Christian Temperance Union in Michigan.

Between 1879 and 1883 Haviland worked with the Freedmen’s Aid Commission in Kansas, counseling and assisting in the relocation and adjustment of former slaves. She also established an academy in Kansas to provide educational opportunity for poor blacks and mounted a campaign to supply food and funds for their needs.

Because of her social work in Kansas, the City of Haviland was named in her honor. In addition, her contributions inspired a well-deserved but rare kind of a tribute in Michigan; the statue of Laura Smith Haviland which graces the lawn of the City Hall in Adrian, Michigan, is one of the few such monuments ever to have been erected in honor of a woman.