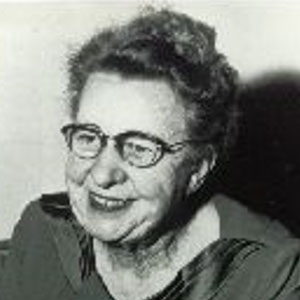 “Jo” Gomon, as she was affectionately called, was born Josephine Fellows on June 29, 1892, in Ann Arbor. She worked her way through the University of Michigan, (as a night switchboard operator) where her father was a Professor. She graduated in 1913 with a degree in engineering, a very uncommon degree for a woman of that day. She later moved to Detroit and took a position teaching physics at what was then known as the City College (now Wayne State University).

Following the death of two of her friends in childbirth during the 1920s, Mrs. Gomon became actively involved in Detroit’s underground birth control clinics. Later she helped found the National Planned Parenthood League and became president of the Detroit Chapter. Her interest in the concerns of the city’s poor and underprivileged led eventually to her involvement in politics and to her position as Executive Secretary to Mayor Frank Murphy.

During the early 1930s Mrs. Gomon advised and actively assisted Mayor Murphy in establishing such New Deal programs as the emergency relief and food bank program and the federal housing program. She also served as a vital link between the Mayor’s office and the Ford Motor Company which at one time made an emergency loan to the City of Detroit enabling it to meet its payroll.

Mrs. Gomon was deeply involved in serving the cause of social justice within the community in other ways as well; she was a founding member of the ACLU in Michigan and worked closely with Clarence Darrow on several Detroit based civil liberties cases. She also became an advisor to Franklin Roosevelt.

In 1933 Josephine Gomon was appointed Secretary-Director of the Detroit Housing Commission, where she supervised construction of Detroit’s first public housing projects. During World War II she was named by Henry Ford as Director of Women personnel at the Willow Run Bomber Plant. Her success in this position led eventually to her becoming an advisor to Walter P. Reuther and an influence in organized labor in the area.

On her death in 1975, the Detroit Free Press wrote that Jo Gomon was the ‘City’s Conscience.’