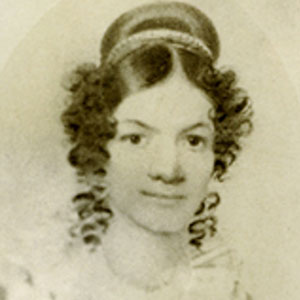 Jane Johnston Schoolcraft (Baamewaawaagizhigokwe, “Woman of the Sound the Stars Make Rushing Through the Sky”) of Sault Ste. Marie is considered by literary scholars and historians to be the first known Native American writer. The granddaughter of the revered Ojibwe chief Waubojeeg, she began as early as 1815 to write poems and stories while translating songs and other Ojibwe works. As the wife of the Michigan Territory Indian agent Henry Rowe Schoolcraft, she continued her work, collaborating with him on his efforts to document Native cultures. Her essays can be found in “Literary Voyager” also known as “Muzzeniegun” the periodical they jointly published in Sault Ste. Marie, Detroit, and New York. Her stories were additionally published in adapted versions by her husband, and became a key source for Longfellow’s epic poem ‘The Song of Hiawatha.’

As a poet, essayist, storyteller, and translator, she was dedicated to preserving her people’s cultural contributions by committing them to the written word. In the process, she created a body of work that is recognized today as having a unique and invaluable place within American literature. That place was further strengthened by the 2007 publication of her biography by Robert Dale Parker, which was named a Library of Michigan Notable Book.

Jane Johnston Schoolcraft lived during an extraordinary period in Michigan history and overcame persistent social conventions regarding women and Native Americans to create something of real value to the generations that followed her. Even today, her work is cited in scholarly articles and published in literary anthologies.