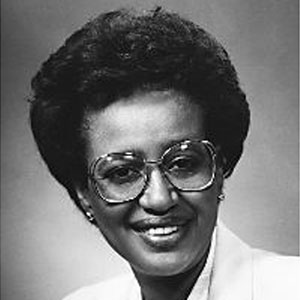 Decades of feminist zeal, productive activism, service to humanity, and successful entrepreneurship mark the life of Jackie Washington in her quest to bring about equal opportunity and equal justice for women, minorities, the poor, and others denied full access to the benefits and blessings of American life.

Jackie’s career began as a school social worker in Detroit. In that capacity she came across so much spousal abuse that she helped organize and became the chair in 1970 of the first Violence Against Women Committee of the NOW Detroit Chapter. Jackie developed a community awareness campaign regarding spousal abuse and helped bring about changes in police response to calls from victims of domestic violence.

As a result of such work, Jackie was appointed to help form a NOW Minority Caucus at the national level. Her advocacy resulted in many African-American, Hispanic, and Asian-American women gaining leadership positions in NOW. For 12 years Jackie served as a member of the board of NOW’s Legal Defense and Education Fund and was the first African American to serve as LDEF’s President. She set policies regarding the LDEF’s involvement in issues of sex equity, sexual harassment, and employment discrimination.

In Detroit in 1975 Jackie co-founded New Options, a personnel agency responsible for the placement of women and minorities in desirable, nontraditional, affirmative action positions in business and industry. She was president for the first five years.

From 1980-1985 Jackie was Human Resources Manager of the Detroit Area Bendix Corporation, then from 1985-1987, she worked as Human Resources Director for Vixen Motor Company in Pontiac. Jackie spent 1988 to 1992 as the first woman president and CEO of the Pontiac Urban League, administering program development, community organization, and advocacy for minorities and the poor.

Since 1992, Jackie has been the first African American woman to serve as executive director of the Planned Parenthood League of Southwest Michigan. She has also been an outspoken advocate for abortion rights and has encouraged prominent black women’s organizations to advocate for choice. A co-founding mother and president of the Sojourner Foundation, she is a trustee or member of many humanitarian organizations.