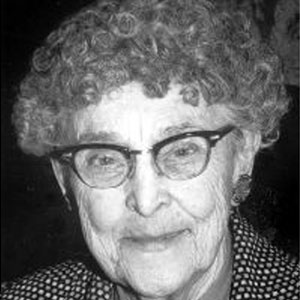 Irene Auberlin’s lasting legacy is World Medical Relief, which she founded in 1953 and which, in 1994 alone, shipped $16 million worth of medical equipment and supplies to 28 countries around the world. At the same time, the organization provided nearly $400,000 worth of prescriptions and supplies to the elderly indigent of the Detroit area.

For 32 years, “Mrs. A.,” as her colleagues called her, directed the organization as a CEO without pay. She formed a board of capable and influential Detroit business leaders and, with their help and the participation of hundreds of volunteers, Mrs. A. funneled millions of dollars worth of desperately needed medicines and equipment from a five-story warehouse in Detroit. These materials went to clinics and hospitals in every part of the globe.

Irene Auberlin received more than 50 awards for her humanitarian efforts including the 1994 Stanley S. Kresge Award for outstanding community service; the 1984 President’s Volunteer Action Award and Silver Medal (personally awarded at the White House by President Ronald Reagan); the 1981 National Jefferson Award for Outstanding Public Service, presented at the U.S. Supreme Court; the 1972 William Booth Award for contributions to the betterment of humanity; and the 1961 Lane Bryant Award for volunteer services.

The enduring nature of her achievements is attested to by the solidity and viability of World Medical Relief today. A salaried director continues the work that Irene Auberlin did for so many years. In 1994, 459 volunteers faithfully reported for duty. Clinics and hospitals everywhere continue to turn to this Michigan institution for medicines and supplies.