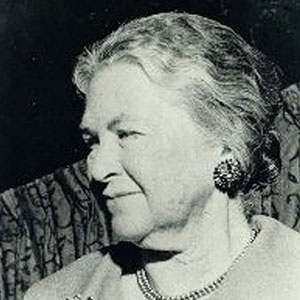 Icie Macy Hoobler’s career as a physiologist and biochemist (1924-1975) was centered in Detroit at the Merrill-Palmer School and Children’s Hospital of Michigan and its successor, the Research Division of the Children’s Fund of Michigan. As director of the Research Laboratory of the Children’s Fund of Michigan, she devised one of the outstanding research programs in America. Her work was characterized by thorough planning, skillful execution, critical interpretation of data, and accurate reporting. She studied the then little-known nutritional needs (particularly vitamins and amino acids) of women during pregnancy, and their impact on pre-and post-natal child development.

Her pioneering investigations provided knowledge of birth defects and growth in children and their links to economic status. Under her leadership, programs were developed to supply both this information and food to mothers. She shared in the production of over 300 papers in scientific journals, and 18 monographs and books, including her autobiography, Boundless Horizons, which was published by the Exposition Press in 1982.

Upon receiving the Frances P. Garvan Award of the American Chemical Society in 1945, she was cited for ‘the substantial and distinguished contributions which she has made to our understanding of the nutrition of growth, of mineral metabolism, and of the chemistry of the red blood cell–all of great importance to human welfare–and for the inspiration which others have derived from her stimulating leadership.’

Icie Macy Hoobler was the first woman ever to chair a local section of the American Chemical Society and serve as national president of this prestigious scientific body. She was also the first woman member of the Detroit Engineering Society and served terms as president of the American Institute of Nutrition and the Michigan Academy of Arts, Sciences and Letters. She was, in addition, a fellow of the American Public Health Association and was a recipient of honorary degrees from Wayne State University and Grand Valley State college, an institution which she helped found.