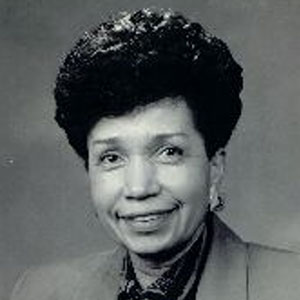 Hortense Golden Canady has been a leader at local, state, and national levels. She is a graduate of Fisk University in Nashville, Tennessee, and came to Lansing with her husband, Dr. Clinton Canady, Jr. She later earned a Master’s Degree from Michigan State University.

Mrs. Canady has made invaluable contributions to Lansing. For example, she was the first African American elected to the Lansing Board of Education. She served with distinction until she was one of the five members of the board recalled by the Citizens for Neighborhood Schools. The quality of her leadership stood out in a time when the community was bitterly divided over school integration.

She was founder of Les Meres, a group that brings together mothers and daughters from the seventh to twelfth grade, and a charter member of the Lansing chapter of Links. She later became the first executive director of the Lansing Community College Foundation.

She was appointed by Governor Milliken to the Governor’s Committee on the Status of Women, and later served on the Michigan Women’s Commission.

Mrs. Canady has received many awards in the course of her career. The Lansing YWCA presented her with the Diana Award for Community Service. She received the Sojourner Truth Award from the Negro Business and Professional Women’s Association. She also received the Frederick D. Patterson Founder’s Medallion from the Michigan United Negro College Fund in 1979 and was recognized as Citizen of the Year by the NAACP in 1980. She and her daughter were honored with the Michigan Women’s Foundation’s Women of Achievement and Courage Award. “Ebony Magazine” listed Mrs. Canady as one of the 100 Most Influential Americans.

Hortense Canady is the mother of Clinton, III, Alan, and Mark, all attorneys. Her daughter, Alexa, a noted pediatric neurosurgeon, was inducted into the Michigan Women’s Hall of Fame in 1989.